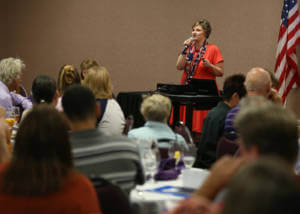 All employers must protect their workers, their customers and themselves when it comes to illicit drug use in the workplace. Doing so will become especially crucial if Nevadans, through November’s ballot, vote to legalize the recreational sale and regulation of marijuana and related products.

This was the primary message of a “Marijuana in the Workplace” lecture delivered Friday at the Carson City Chamber of Commerce’s Soup’s On! luncheon, in collaboration with Partnership Carson City and the city’s district attorney’s office.

Partnership, a local coalition dedicated to the community’s health and wellness, arranged the event to provide citizens with a broader perspective on issues related to Question 2 and ensure they get research- and fact-based information, said Kathy Bartosz, executive director.

For a safe and drug-free workplace, business owners and employers first should implement a drug and alcohol policy immediately if they don’t have one — before an incident occurs. Additionally, each job description should include the statement that the person holding the position cannot perform their duties while high, said Jo McGuire, the event’s guest speaker who urges employers to adopt zero-tolerance strategies. As a member of the Drug and Alcohol Testing Industry Association’s board of directors, she educates employers and other groups about public health and safety.

Second, employers should communicate the rules and expectations to everyone and consistently enforce them.

“Marijuana is the largest, most common impact we have to the workplace right now,” added McGuire, referring to the U.S.

The cost resulting from impaired employees on the job is significant, McGuire said. Small businesses can lose up to $7,000 a month in productivity and worker turnover, tardiness, absenteeism and theft. In workplaces with marijuana use among employees, the rate of absenteeism is 75 percent higher than in those without. Fifty-five percent more industrial accidents and 85 percent more injuries occur in that scenario as well, according to McGuire.

Today’s marijuana is much more potent than that of decades ago, McGuire said. Whereas the THC, or tetrahydrocannabinol, content was around 2 to 3 percent in the 1960s and 1970s, today it can be as high as 30 percent. In marijuana products, or chemically altered extractions from the plant, it can reach 90 percent, she said.

As such, the effects are longer lasting, up to 24 to 48 hours, McGuire said. Consequently, what employees do on their own time, say on weekends, can impact the workplace.

New products, using butane and hash oil for instance, are so potent that one hit from a tiny drop — equivalent to 26 puffs on a joint — can render a person unconscious.

The varied marijuana delivery systems include THC cartridges used in vapor pens, roll-on skin applicators and edibles, from cookies to snack mix, which often resemble the real food items and can be highly potent.

“It’s such a variable product that we’re all over the map with variable compounds and don’t have any way of isolating how they affect people,” McGuire said.

As a warning to Nevada companies, McGuire cited the increase in positive workplace drug tests that occurred during the first year marijuana was legal in Colorado and Washington. The number jumped from a 6 percent national average to 20 and 23 percent, respectively.

“What that means is employers are not doing a good job of educating employees that workplace drug use is not OK,” she added.

“We cannot tolerate endangering the public health and safety. We have a greater responsibility to ourselves, to our families and to our communities.”

For more information about Partnership Carson City and their services, call 775-841-4730 or go to pcccarson.org.