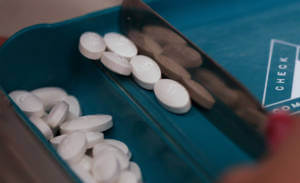 Addiction does not discriminate. It grabs ahold and tightens, oftentimes prompting even the most reasonable-seeming people to do unreasonable things to feed it.

“You will see exceptionally wonderful people fall into that trap (of addiction) and go to extreme measures that they would never, ever conceive of themselves doing prior to addiction,” said Kathy Bartosz, director of Partnership Carson City, a nonprofit that focuses on substance-abuse prevention and community education. “That might include going to a substance such as heroin — which is also an opium — so it meets the same need as a prescription medication; or stealing; or buying from a guy on the street. That’s what the power of addiction does.”

The recent arrests of nine people accused of operating a “pill mill” out of a Reno car dealership illustrates that prescription drug abuse is a serious problem that affects people from all walks of life.

“I think what happened with Jones-West Ford is that it shows not a lot of families are immune from this kind of thing happening,” said Barry Smith, who sits on the board of Partnership Carson City.

Nationally, more than 165,000 people died from overdose related to opioid pain mediation between 1999 and 2014, the latest figures released by the Center for Disease Control.

Nevada is not immune, and neither is its capital city.

“Prescription drug abuse is a very serious problem that flourishes under the surface and a lot of people don’t realize it,” Smith said.

It’s a fine line to ensure that people who need prescription pain medication get what they need, while at the same time making sure that those pills don’t get into the wrong hands, sometimes the hands of family members or friends with an addiction problem.

Partnership Carson City holds a twice-a-year prescription drug and needle roundup that allows people to safely dispose of prescription medication that they either no longer need or that has expired. April’s roundup resulted in the collection of 194 pounds of medication.

Keeping those drugs out of the hands of those who might abuse them is one goal of the roundups, but they are important for another reason as well.

“The other intent is it brings back into the public eye the importance of securing these medications,” Bartosz said. “We’re not naïve. We know that for every drug, every pill we collect, there are a thousand more still out there.”

But it is providing a service and raising awareness. Volunteers, including the Carson City Elks, helped with the most recent roundup.

While the roundups take place twice a year, Partnership Carson City has information on its website, pcccarson.org, on safely disposing of drugs at home. There is also a drop-off in the lobby of the Carson City Sheriff’s Office, 911 E. Musser St.