Finding Stacia: A story of addiction and survival

This is the second in a series about Stacia Nepper, the new deputy director for Partnership Carson City. She hopes her story of overcoming addiction will inspire others to seek help. Reach her or find additional resources at pcccarson.org.

Once the funeral was over and family members had all gone back home, Stacia Nepper knew it was time to deal with her cousin’s death.

She had to learn to live without Anthony. The problem was, she didn’t want to. So, she stayed high.

Sometimes, she traded weed for meth, but mostly her nemesis turned friend just gave it to her.

But Stacia wasn’t the only one suffering. Auntie Kayla, Anthony’s mom, was drowning in her sorrow. Some days, she wasn’t even able to get out of bed.

She went to school, ran errands for her aunt and cringed when she heard the sobs coming for her aunt’s bedroom.

All the while, she stayed high. With no connections in Utah, she raided the medicine cabinet for prescription drugs, stealing just enough to go unnoticed.

After nearly a year, Stacia grew weary of helping with her aunt’s grief, her own grief, but mostly of hearing her aunt cry. She moved back to Fallon, where she worked nights as a CNA. It didn’t take her long to notice a co-worker with a familiar sense of energy. Soon the two were smoking dope together on their breaks.

To stay working, Stacia needed to transfer her license from Utah to Nevada. But she never got around to filling out the paperwork.

When she was fired, she moved back to Hawthorne. She went back to working odd jobs, hanging out in the casinos and fell in with old friends who were more than willing to share their meth.

She never slept. She never ate. She spent hours picking at blemishes that didn’t exist on her face. Naturally slender, now she wore two pairs of leggings just to fill out her jeans. She stopped showing up for family events.

Growing up, she and her cousin planned their weddings and vowed to be each other’s maids of honor.

Instead, she was kicked out of her cousin’s wedding party.

It would have felt like a rock bottom, but the cool feeling of smoke in her throat exhaled into a swirling “meth cloud,” made it seem bearable.

As lifelong friends fell out of her life, new ones were ready to take their place. A friend of her parents moved back to Hawthorne. He was older and handsome. It wasn’t long until they started getting high together.

He and Stacia started out as friends, then it turned to something more. But love evolved into heartbreak, and they broke up.

One week later, she found out she was pregnant.

She considered the alternatives but decided she couldn’t abort or give her child up for adoption. So, she quit using and focused on getting healthy for her baby and moved in with her mom in Gardnerville.

The minute she heard the heartbeat, she fell in love with her baby girl.

A week before giving birth, her ex-boyfriend called. He wanted to try to make it work.

Becoming a mother was beautiful and overwhelming. It felt good to have her baby’s father back in the picture.

They dated long-distance for a while, and when little Emma turned 1, Stacia moved with her to Hawthorne to be a family.

There was a sense of comfort moving back to her hometown. It felt normal.

Although her boyfriend swore he was no longer using, she discovered his lies. When she confronted him, he tried to deny it; before long, she was off and running with him. 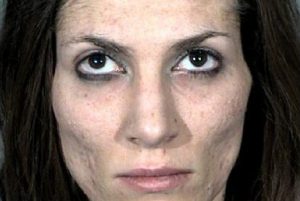 Stacia Nepper was arrested several times during her drug-addicted years.

Their relationship felt new again. The friendship that had been lost was found again.

It wasn’t long, however, before he started disappearing again for long periods of time. She knew what that meant: She wasn’t the only one. Her fear every time he walked out of the door was that he would never walk back through the door again.

She couldn’t take it anymore. She moved out to start over with her daughter.

But Emma was just a reminder of the betrayal, of the wasted years with a man who could never properly love her.

When 2-year-old Emma toddled to her mommy whining for affection, Stacia shouted, “Shut up! And get away from me.”

Her resentment was so strong, she almost enjoyed knowing Emma was sleeping in the other room while Stacia and her friends smoked meth.

Stacia knew she wasn’t a good mom, so she agreed to let her parents take Emma. They allowed Emma to visit her mom one weekend a month.

On one of those weekends in August 2016, Stacia picked up Emma. She hadn’t slept in five days.

To make the most of her time with her daughter, she decided she needed to stay high.

She drove to Reno to meet the new man she was seeing, and with Emma in the backseat, the couple smoked dope in the parking lot of a casino.

After he left, Stacia didn’t want to wake the baby, so she began the drive back to Hawthorne with Emma stretched out in back.

Heading east on the interstate out of Reno, Stacia settled in to the familiar drive … until she woke up to the jerking and screeching metal of a crash into the guardrail.

“My baby!” was her only thought.

Data published in TIME Magazine indicated 55-60% of all post traumatic stress disorder (PTSD) victims end up developing some sort of chemical dependency, an assertion backed up by the American Psychological Association (APA).