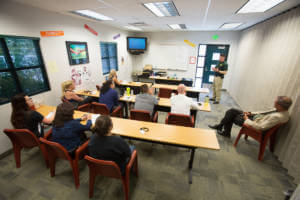 A new drug called “dove” — typically created by mixing LSD, meth and MDMA — has made an appearance in Carson City, Deputy Josh Chaney told a group of law enforcement officials this week.
It was one of several unfamiliar drugs that his fellow officers might across, warned Chaney, a drug-recognition expert and member of the Carson City Sheriff’s Office’s Special Enforcement Team.

“I put this class together for drug trends to help educate other agencies,” he said. “A lot of the drug trainings we go to talk about national trends or across the Reno-Sparks area or the West Coast. This is specific to Carson City.”

In a presentation at the Juvenile Probation Department on Tuesday, Chaney listed signs and symptoms of types of drugs. Hallucinogenics, he said, reverse the senses. “People will be hearing tastes and seeing sounds,” he said. Signs of marijuana use include dilated eyes, elevated heart rate, green tint on the tongue, eyelid and body tremors, among others. Jessica Chrzanowski, a Carson City sheriff’s deputy assigned to the schools, said the presentation was helpful.

“The more updated trends, what to look for, what these kids are using and how they’re using these drugs — it’s good to know what to look for,” she said. “I had no idea about some of this stuff.” Chaney said he designed a presentation for firefighter/paramedics as well to help them better protect themselves and better treat the patients.

“When they respond to an overdose situation, they need to know what drugs the person has been using,” Chaney said. “Certain medications they can use could do harm.” He also advises them on drug-related protocols.

“The standard now is to treat a butane hash oil lab like a meth lab,” Chaney said. “They need to glove up and be on respirators.”

Chaney said the presentations all work together to create better-trained and more-prepared first responders. Mike Rapisora, a juvenile probation officer, said it is crucial to keep up on the drug trends specific to Carson City.

“It’s good to see what kinds of drug trends we have out there and what we can do to better help the community,” Rapisora said. “Learning about all the new, lab-created drugs is really important. The drugs change every day with all the synthetics out there.”