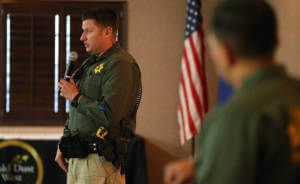 Mayor Bob Crowell likes to say Carson City is the best city in the state, if not the country. But at a recent gathering of area pharmacists and technicians, he acknowledged some of its hidden shortcomings.

“When you pull back the sheets, we’ve got problems,” he said. “Prescription drugs are a big part of that problem.”

Lt. Andy Rasor from the Nevada Division of Investigation said only recently has law enforcement taken seriously the abuse of prescription medication.

“There’s this perception that because it is a prescription drug that it’s better,” Rasor said. “People didn’t give it the severity it deserves. But with the recent arrests, like the big bust up in Reno, there’s been a wake-up call for a lot of people. They’re starting to see, yeah, there is a problem.”

Pharmacists, Rasor said, will be affected by the rise in abuse.

“As we start to see these prescription drugs have more controls on them, we’re going to see an increase in heroin,” he said. “We also have to focus on the unintended consequences.”

Those consequences could result in pharmacy burglaries and fraudulent scripts. Doctors, pharmacists and other staff could also be involved, Rasor cautioned.

Deputy Josh Chaney of the Carson City Sheriff’s Office listed some of the warning signs for pharmacists.

“When you see doctors overprescribing or a doctor who doesn’t normally prescribe painkillers starts giving them out in abundance, you should give us a call,” he said. “Or if people are insistent for brand names. Our prescription pill users don’t want the generic brand. They are going to ask specifically for the name brand.”

He said some users crush the pills to inject straight into the bloodstream.

“If they fill a prescription for pain pills and ask for larger-gauge needles, that should probably start setting alarms off,” Chaney said.

“Do what you can to verify the driver’s license. Do a Google search to make sure the doctor writing the prescription really exists. Be suspicious. Figure out if this is really legit,” he said. “That’s the best assistance we can get. Keep the suspect on the scene until we can get there and hook them.”

Carson City Sheriff’s Sgt. Daniel Gonzales urged them to be partners in curbing the abuse of prescription drugs.

“We need you guys to be our eyes and our ears when this stuff is happening,” Gonzales said. “Without you guys, we are dead in the water.”