Mom of suicide victim reaches out to help others

Alejandra Lopez thought she knew the signs of a person who may be suicidal. She assumed they would be despondent, talking about ending their lives and, as a final indication, would be giving away all of their precious possessions. 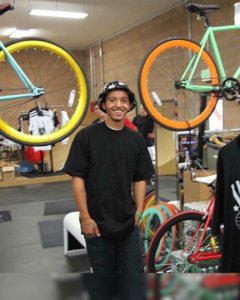 Nick Cueto, 22, committed suicide in 2017. His mom, Alejandra Lopez, participated in the 4th annual 5k Walk for Suicide Prevention in the hopes that raising awareness about the resources available will help prevent similar tragedies. (Photo courtesy of the Lopez Family)

“He would always smile and laugh and have a good time with us at the house,” she recalled.

The next morning, she got a call from the Carson City Sheriff’s Office.

She remembers all the details of that morning. She was cleaning under her bed. She didn’t get to her phone in time, so she called the number back.

The voice on the other end asked if she knew Nick.

Then she heard phrases like, “We found his body,” and “He’s deceased.”

She learned he had taken his own life, and identified his body through a picture from the coroner.

“I saw Nick’s pretty little lips,” she said. “I knew that was my son.”

She had to go down to the sheriff’s office to pick up his BMX bike and backpack — all she had left of the oldest of her four children.

He built that BMX bike himself. It was his constant companion, spending much of his free time at Carson City’s skate park. He was even sponsored by The Wheel House for a time.

“The kids would sit at Mills Park and watch him,” she said. “They would say, ‘Do that again!’”

After he graduated from Pioneer High School, he moved to Reno where he worked two jobs up until two weeks prior to his death.

While he’d suffered from depression before, Alejandra thought he had it under control.

“You never get over depression, but I thought he was getting better,” she said. “He was very responsible, always looking out for his siblings and me. He was a character, and I loved him a lot.”

Alejandra initially took time off her job at Walmart, where she has worked for eight years, to mourn her son. A year later, she is now hoping to help other families prevent similar tragedies.

“I accepted the fact he took his own life,” she said. “I just want to help. It needs to be talked about more.”

She and her husband, Martin, participated in Carson City’s 5K Walk for Suicide Prevention last week.

“There is help out there and there are people you can talk to,” she said.

And she wants people to look beyond the obvious signs.

“He had been hiding it for so long, he was perfect at it,” she said. “If I had seen something, I would have (helped).”

Through it all, she said, she has been able to find some peace.

“I believe in God, and he’s with God,” she said. “I have signs in my house that he’s around. I talk to him like he’s there. I talk to him every night.”

It’s that peace she wants to share with others.

“I have a lot of love for people,” she said. “I will always be there for somebody who feels like they have no one to talk to.”